5 Tech Trends that will Dominate 2017

We are experiencing digital revolution. From IoT and Smart Home Tech, automation, artificial intelligence, machine learning, to intelligent apps, extraordinary advancements are being made in technology each day. On National Technology Day, Indus Net Technologies draws up a list of 5 technologies that would continue to remain in news this year.

Today, Artificial Intelligence (AI) and Machine Learning (ML), a subset of AI, are no longer trendy expressions. According to Hubspot, 90 % of the world’s data has been created in the previous two years. With so much data being generated every minute, AI has turned into the potential transformative technology, which would just improve with time. In fact, today AI is being applied to almost every field.

Google and Microsoft already have AI services in their clouds. But 2017 will see more use cases in AI and ML. These two path-breaking technologies will go more commonplace and more tech giants (read: Baidu, HP, Intel, and NVIDIA) will be focussing on ML, thus escalating the competition. AI and ML, which include technologies such as deep learning, neural networks, and natural-language processing, will also help organizations to come up with enhanced, strategic decisions.

2017 will be the year when China will rise as a pivotal player in AI. Andrew Ng, chief scientist of Baidu, the Chinese Internet services company, had recently announced that AI is “the new electricity.” Also, the Chinese government and other tech companies in China are vigorously infusing cash in the recent advances of AI.
Narrative Science has reported that 62% of enterprises will utilize AI by 2018. AI and ML are already playing a crucial role in revamping healthcare, transport, finance, education and entertainment sectors. In the coming days, we will witness all the more such occurrences where AI and ML will play a humongous role revolutionizing banking and fintech companies especially when it comes to real-time transactions and customer personalization. It would take more time to fully come up with driverless cars but AI and ML will be executed in the transport arena particularly in simplifying distribution networks and optimizing logistics.

2016 saw some major accomplishments in Augmented Reality (AR) and Virtual Reality (VR), especially the AR game, Pokemon Go, which was downloaded over 500 million times since making its debut in July 2016. But now, these two budding technologies have moved beyond the gaming and entertainment territories and have discovered use cases in the field of education, travel and hospitality, banking, real estate and automotive.

Major tech giants of the world such as Qualcomm, Samsung, HTC, and Nokia have already launched their VR and AR headsets. Microsoft, Google, and Facebook are also getting fiercely competitive in the AR space. And with Apple’s AR glasses rumoured to be arriving this year, the market for immersive technologies may turn into a hot cake in 2017. Also, reports suggest that venues will soon be capable of streaming live shows for audiences, especially for those who don’t want to leave their homes.

2017 would be a major year for VR and AR and the usage of these technologies in business should aggravate. Also, the shipments of VR and AR headsets might see an ascent in 2017. The technological innovations also have the potential to provide customers with an updated user experience. Also, this year tech giants will pay more attention to the enhancement in setup, refined resolution and price of these two youthful technologies.

There is a rising demand for home automation and smart home of the future with Internet of Things (IoT) technologies are hot topics in the market for quite some time now. According to Statista, smart home revenue in the US is projected to reach $14.6 billion in 2017.

Presently, there is strict competition in the market with regards to smart home technology, but certain worries such as security and interoperability are posing a hindrance to this technological innovation. Smart home IoT devices minimize costs and preserve energy and with big players such as Google, Apple, and Amazon, already being involved in this smart home space, we expect smart home IoT devices to go further mainstream this year. Truth be told, the key challenge to smart home tech offer is security and companies will update IoT devices to understand and tackle the security challenges with smart homes. Tech companies will likewise pay more heed to remote home monitoring this year. 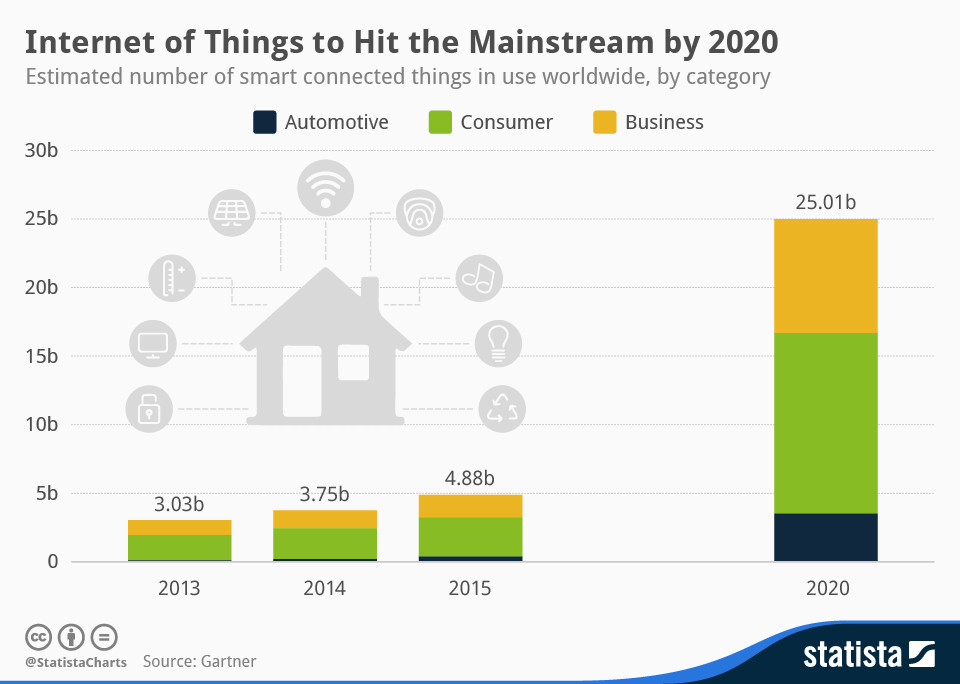 Today AI is being used to detect critical diseases, Tesla and Uber are experimenting with self-driving cars, and robots are being increasingly designed to deal with tedious workload and manage repetitive work. Automation has begun and it’s happening for real. Automation will transform the global work force by reducing the production cost, and enhancing the quality and reliability. The way the tech companies and venture capitalists are imbuing cash and innovation here, it will only get stronger with time.

A few years ago, robots mainly accomplished physical work but today, they have developed ‘cognitive capabilities’ and can lessen repetitive manual work. With greater headway in AI, machine learning and robotics, automation will become commonplace this year. Also, with automation of workflow gradually entering the professional space, employees can invest more time in vital strategic decisions.

AI and ML are taking the world by storm and are soon becoming an inherent part of our everyday life. Intelligent apps, which have superior integrated capabilities such as virtual personal assistants (VPAs) and ML, are more useful and powerful. Thus, they are capable of making human tasks easier and swift (by prioritizing emails). Also, intelligent apps such as virtual customer assistants (VCAs) are more specialized in customer service and sales.

According to Gartner, by 2018, most of the world’s largest 200 companies will exploit intelligent apps and utilize the full toolkit of big data and analytics tools to refine their offers and improve customer experience.

We also expect business across the world to leverage the disruptive potential of these algorithm-based intelligent apps this year. Using AI, intelligent apps will streamline the structure of the work environment and upgrade customer experience and involvement.

Ray Kurzweil, Google’s Director of Engineering had said, “Technology goes beyond mere tool making; it is a process of creating ever more powerful technology using the tools from the previous round of innovation.”
The way rapid technological transformation is going on the future of technological innovations looks bright.

Do you want us to include any other impressive innovation?