As severe weather occurrences continue to hamper life across the globe, P&C insurers are feeling the pinch owing to their frontline position in the life and property damage scenario. Simply put insurers are paying out more to policyholders as extreme weather events such as flooding, droughts, storms and heatwaves become more frequent and more severe.

Asset Owners Disclosure Project states that natural calamities occurring due to climate change has a direct implication on an insurer’s business valuation. Insurers suffer from financial losses, regulatory and technology changes, and liability risks that impact their business operations, underwriting, and financial reserving.

Natural calamities have been integral to mankind, so why bother now?

Ongoing climate change triggers “secondary perils” such as wildfires, flash floods and hail storms in short intervals, which in turn makes it the highest contributor in terms of damage caused to property and life.

As per a Reuters analysis, average insured loss caused by “secondary perils” during 2010 – 2018, was almost double when compared to “primary perils”, such as earthquakes and hurricanes. 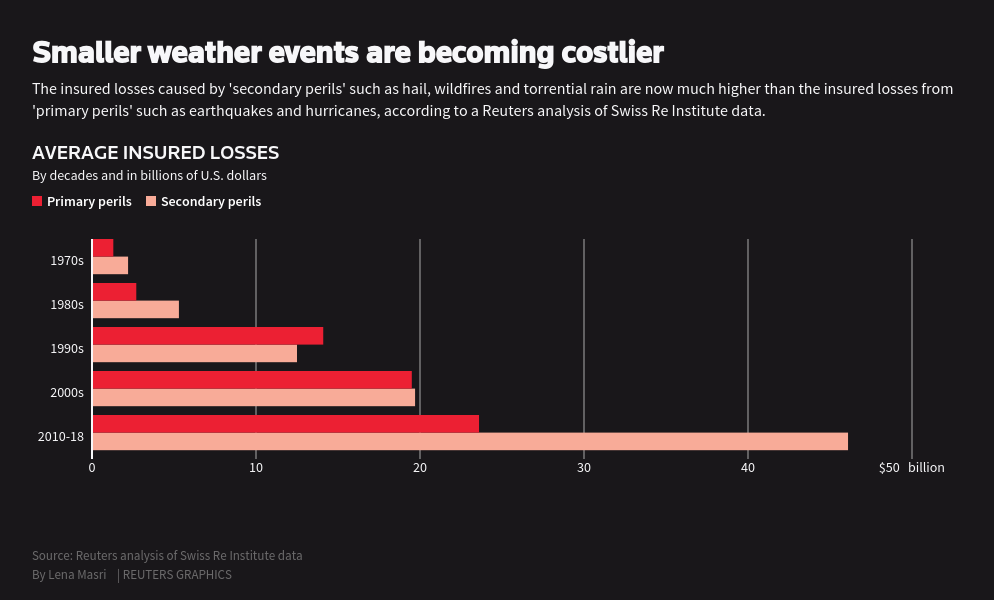 These “secondary perils” are localised in nature and hence insurers need to analyse the events on a case-by-case basis. Popular sentiment among industry stakeholders is that these events are relatively costlier.

If covering “secondary perils” become costlier, will the industry be able to maintain its price competitiveness?

A steep spike in the occurrences of “secondary perils” will force insurers to adjust premium pricing and alter risk calculations. Munich Re has already included discussions on premium pricings as part of its strategic agenda, with clients holding asset concentrations in ‘vulnerable parts’ of its markets. Munich Re’s insurance cover in hurricane-prone regions such as Florida is already higher than in northern Europe, by an order of magnitude. The company is actively adjusting its premiums for regions which face threat from “convective storms” caused by global warming. These terms are mostly levied on parts of Germany, Austria, France, south-west Italy and the US Midwest.

“If the risk from wildfires, flooding, storms or hail is increasing then the only sustainable option we have is to adjust our risk prices accordingly. In the long run, it might become a social issue, Affordability is so critical [because] some people on low and average incomes in some regions will no longer be able to buy insurance.” – Ernst Rauch, Chief Climatologist, Munich Re

As insurers are forced to increase their premium prices, the average customer will find it increasingly difficult to afford financial protection that they deserve and hence will pose a grave danger to the social order.

Fortunately, the saying “it is never too late” holds true here and digital technologies are being looked at for a fitting answer to combat negative business implications arising from climate change.

“Hyperlocal” weather data such as precipitation, tides, erosion & subsidence, waves, sub-surface flow, temperature, humidity and wind is being looked at to improve insurance pricing models. Such data is fetched from technology platforms including ground and orbital sensors, wireless and cable network signals, and climate projecting algorithms. Based on these factors, localities are marked on “hazard maps” and customers are charged premiums based on the localities they live in.

Advanced weather tech companies are coming up with their predictive and assessment tools featuring highly accurate weather database which boast over 90% accuracy in urban areas, 300-500m geo resolution with an update interval of 60 seconds. Insurers are now in the position to utilize predictive models which can account for climate variables from an hour to more than 50 years down the line. These tools are designed to empower decision-makers with interactive maps, and reports, through an API framework.

Let us look at some of the established insurers to have adopted “hyperlocal” weather and climate data for improving underwriting and insurance pricing, and better risk assessment.

Other insurers are increasingly showing signs of factoring in climate change into their business model with digital technology forming the backbone for the success of the model.

Insurers are mostly reacting to losses incurred, rather than proactively preventing, at least trying to prevent claims from happening

We at Indus Net Technologies firmly believe in the philosophy “prevention is better than cure”. Preventing a claim incident from occurring remains the best possible approach to running a successful insurance business.

Let us take a look at insurers who have already taken a leap towards hyper-local weather analytics and are on their way to prevent potential claims:

Implementing customized weather and climate analytics model is a viable option for insurers to tackle climate change. Measuring potential risks of operating in vulnerable areas, and assessment of tentative damage caused after an event can be effectively achieved through the use of an API forecasting model.

In such a business model, we predict the insurer to gain a competitive edge over its rivals when it comes to claims prevention and management, underwriting and risk assessment and claims fraud management.