The Rise Of AI-Powered Autonomous Vehicles : Forces Powering The Evolution In The Auto Industry

In the world of technology when we talk about Self-driving cars it’s often paired with artificial intelligence. Simply put, you cannot really discuss one without the other. Though AI is being implemented at rapid speed in a variety of sectors, the way in which it’s being used in the automotive industry is a hot-button issue right now.

2020 is going to be a big year for autonomous transport. Tesla has tentatively announced that next year, it will be “feature complete” when it comes to self-driving, meaning that a car can find a passenger in one location and drive them to another without any human intervention. With other big advancements coming in the industry, driverless cars may well become more popular and may as well define the next 18 months in the AI community.

Fifth-generation cellular network technology or 5G has already been rolled out in certain areas around the world in the past year. In 2020 it is expected, there will be more countries embracing 5G technology with supporting devices the following suit. 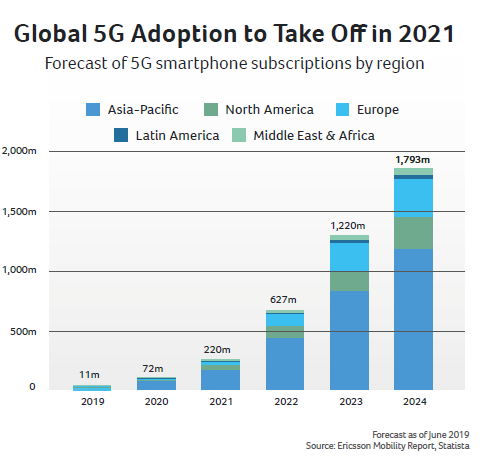 5G technology allows for faster speeds as it operates at a higher frequency in the wireless spectrum thus resulting in quicker processing with lower latencies. Not only this, but it also operates at a lower power compared to previous generations along with providing mass connectivity between devices.

So you may ask, what does this mean for autonomous vehicle?

C-2VX (vehicle-to-everything) will harness the power of 5G for vehicle-vehicle (V2V), vehicle-to-infrastructure (V2I) and vehicle-to-network (V2N) communication. Low latency rates coupled with the fact that the infrastructure is likely to be in place by 2020, 5G will be the natural solution to take autonomous driving to the next level. 5G will allow driverless cars to react to surroundings, identify obstacles and relay such information to the computers on-board in real-time.

To estimate the potential of autonomous vehicles and to approximate a timeline of it become the norm we must map the journey from zero autonomy to complete automation in the following steps:

Autonomy in respect to self-driving vehicles comes about in 6 stages:

In January 2019, Nvidia announced ‘Nvidia Drive Autopilot’, which seeks to bring AI-powered Level 2+ autonomous driving with AI-assisted smart cockpits, to mainstream passenger vehicles. It has received support from OEM’s like Mercedes-Benz, Volvo and auto parts suppliers like ZF and Continental.

The Dubai Future Foundation, along with Dubai’s Roads and Transport Authority, has already launched the Dubai Autonomous Transportation Strategy. The strategy hopes to transform 25% of all transport in Dubai autonomous by 2030.

Businesses are more likely to invest in autonomous vehicles before consumers. Hence, industrial vehicles such as tractors, bulldozers and others will be the first ones turning autonomous. They may now accomplish commercial tasks efficiently with higher accuracy in a shorter period of time as the element of human fatigue is no more a hindrance.

There’s a valid reason for businesses to embrace this technology first. We witness a general sense of doubt in the eyes of public regarding the safety of this technology, however, if the industries lead the initiative they will be able to establish the successful real-life application of this technology and gain public confidence.

Corporations doing research and development in autonomous driving technology – such as Google, can make use of the learnings and proofs-of-concept in other domains of their business.

To summarize- It’s established that there is a lot of potential in the technology to cut costs, make roads safer both for passengers as well as pedestrians, take manufacturing efficiency to its peak. What is lacking is supportive infrastructure, which in the form of 5G network and support from automotive OEM’s seems promising. Second, safety concerns regarding this technology which will be eliminated once businesses set new benchmarks of its industrial application.

The 2020s probably won’t bring flying cars, solar roads or robotic gas pumps, like much of our current world and technology this decade will see a blend of the amazingly futuristic and frightfully analog. Level 5 automation is still far from reality but we will inch closer to it in the coming decade.