We, humans, are wired for stories. We see characters and stories in everything around us. When I say everything, I mean literally everything – from cheese toasties and pancakes to clouds. The phenomenon is called Pareidolia or “the imagined perception of a pattern or meaning where it does not actually exist.” It’s the human brain’s tendency to add characters to abstract objects and try to find a connection with them through an imaginary narrative. What if I told you that the patterns shown in the below image aren’t just shapes but characters in a love triangle? 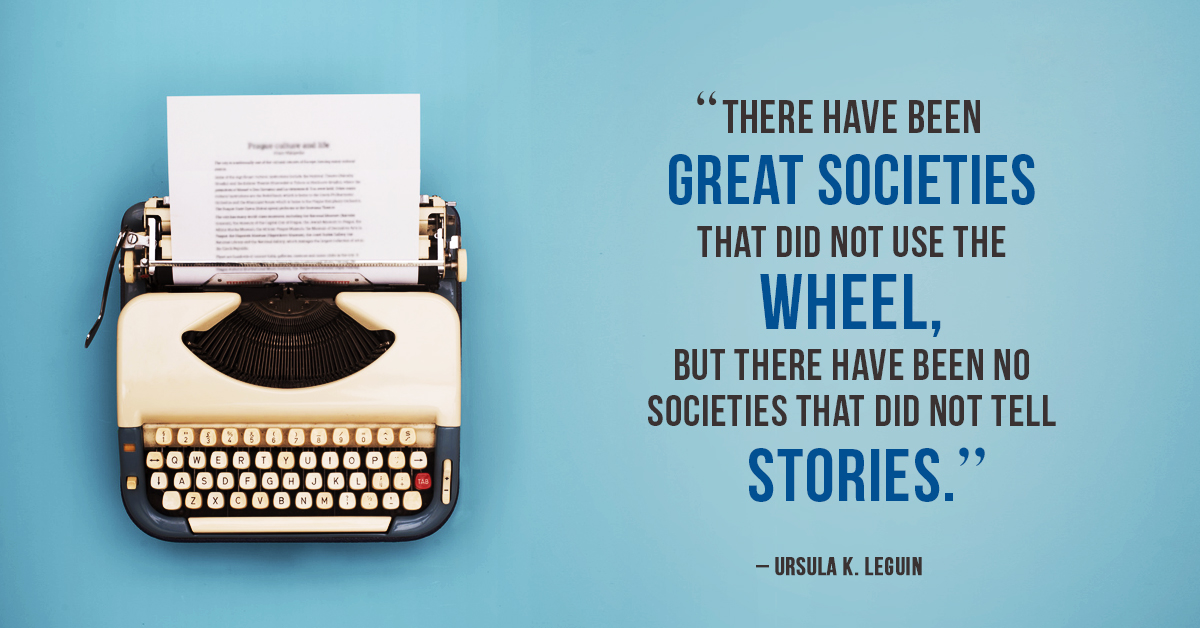 Throughout the history of civilization, stories have existed in many forms – as cave paintings, myths and legends, fables, songs, and poems. Over the years, the medium and style of storytelling have changed but its essence remains still the same.

While the digital landscape is busy looking ways to spin a yarn in innovative ways, here are 6 rules that will always make your story worth telling.

The human brain can process an image seen for just 13 milliseconds. This underlines the power of visual elements when it comes to storytelling. Eye-catching visual elements such as videos, infographics, gifs, and photographs help your audience get a better idea of the message in the story. Think, for example, New York Times’ original multimedia content Snow Fall: The Avalanche at Tunnel Creek which tells the tragic story of the 2012 Tunnel Creek avalanche with video clips, photographs, animated maps, annotations, and text. Many even called it the future of web storytelling and rightly so.

With social media & smartphones increasingly becoming a part of our lives, visual elements have a great deal of role in forming the narrative. And marketers are already leveraging the power of visuals to make their brand narratives exciting and unique on social.

Weaving numbers into your story is a great way to lend credibility to your narrative. An often-quoted example of data storytelling done right is Airbnb’s Cheers to the New Year video in 2015. The interactive video gave the audience an insight into the number of guests celebrating New Year’s eve in Airbnb’s guesthouses across the world. Now, that’s a unique way of letting the data speak for you.

People are not interested in numbers. But, they are interested when those numbers tell a story. Spotify has a unique way of presenting year-end listening data with ads that aren’t promotion but stories. Just look at the billboard that Spotify had put up in 2016.

Last year, Netflix taking a cue from Spotify took to Twitter and told a story around the viewing data of its Christmas film titled A Christmas Prince.

Empathy isn’t sympathy. Sympathy is feeling compassion for a person who is in a difficult situation, whereas empathy is putting yourself in the shoes of a person and feeling what he/she is feeling. The National Autistic Society’s (NAS) VR campaign offers an insight into the daily lives of people living with Autism. As the participants try on the VR headset they are shocked by an array of sounds surrounding them, much like the way people with Autism experience as they go about their daily lives.

This Discover card campaign leverages the power of empathy in a unique way by featuring people calling customer service agents who turn out to be the exact replicas of the callers. The ad ends with an empathetic statement “We treat you like you’d treat you.”

When a story is too perfect, it can come off as fake. Storytelling is a way of building relationships. And relationships don’t last long if they aren’t built on the foundation of trust and honesty. The 2017 Consumer Content Report by Stackla found that 20% of consumers (and 30% of Millennials) have unfollowed a brand on social media because of inauthentic content.

One of the shining examples of weaving authenticity into storytelling is this year’s CoverGirl’s #IAmWhatIMakeUp Campaign featuring a model with vitiligo has won millions of hearts because of its honest attempt to celebrate the beauty of all kinds. While the model applies CoverGirl’s truBlend foundation in two different shades, we hear her asking “Why to try to blend in when you can choose to stand out?”

Users often shy away from too perfect characters – heroes and sheroes who lack human traits such as fear and desire. Remember Nescafe’s #ItAllStarts ad starring a stammering standup comedian? It was one of the most talked-about campaigns on social as it candidly showed a hero facing one’s fears. After all, not all heroes fight aliens. Some fight their fears. We discuss more brands and how they are making connection with their users by being human.

We are hardwired to react emotionally to stories. And this study is a testament to our story-readiness potential. It was conducted by Origin/Hill Holiday where 3,000 online panel respondents were asked about the perceived value of various listings. In every case, the addition of a story upped the value of the listing.

Emotionally engaging stories inspire people to act. In his study Why Inspiring Stories Make Us React: The Neuroscience of Narrative Paul Zak found that highly emotional narratives cause oxytocin release and have the power to affect our attitudes, beliefs, and behaviours.

6. Don’t Lose Sight Of Your Audience:

A Sprout Social study entitled “Championing Change in the Age of Social Media“ found that most consumers want brands to take a position on political or social issues. However, in today’s noise-filled landscape, it’s easy to lose sight of your audience’s needs and wants. For instance, women’s rights protestors dressing like the Handmaid’s Tale inspired the lingerie website Yandy to come up with “Brave Red Maiden” costume. “An upsetting dystopian future has emerged where women no longer have a say,” the description of the costume read. “However, we say be bold and speak your mind in this exclusive Brave Red Maiden costume.” The costume immediately sparked outrage with users taking to social media criticizing it.

Pepsi’s Kendall Jenner ad set around the Black Lives Matter movement is one more example of storytelling missing the mark. The ad was pulled out after being mocked by users, and one of them was Bernice King who tweeted a photo of her father Martin Luther King Jr being confronted by a police officer at a protest march. The tweet said, “If only Daddy would have known about the power of Pepsi.”

Note: This blog has been originally posted on https://www.techshu.com/blog/6-rules-great-storytelling