Yet another proud moment for all of us at Indus Net Technologies! 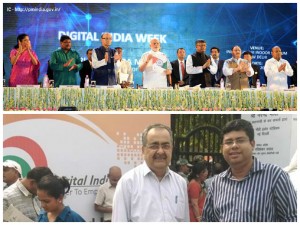 Team Indus Net is proud to be a part of the much talked-of campaign “Digital India”, initiated by the Hon’ble Prime Minister of India, Shri Narendra Modi. Held at the Indira Gandhi Stadium of New Delhi on 1st July, 2015, this is the visionary program of Shri Narendra Modi, organized to present the Government of India’s initiative for digitizing the country. This initiative is believed to take India to a new height where the country would have an economy with connected knowledge and strong leadership. This Digital India initiative is even expected to enhance the collaboration between the Government and tech companies. In fact, many of the big players like the Aditya Birla Group, the Bharti Group etc. have already started playing a significant role in the digitalization of the country of India.

As the entire IT industry is highly banking on this visionary program of Shri Narendra Modi, Indus Net Technologies, in association with the National Informatics Centre, proudly contributes to this initiative by developing the mobile app for MyGov.in. Though we have got a number of Government projects like the development of websites for Lok Sabha, Ministry of Human Resource and Development, Ministry of Tourism, NIMHANS and many more to our credit, however, being a part of the Digital Media initiative is a bit more special. As our Founder and CEO, Mr. Abhishek Rungta said, “The current engagement will empower the citizens with the mobile app for MyGov, thus allowing people to act and participate on the move.” 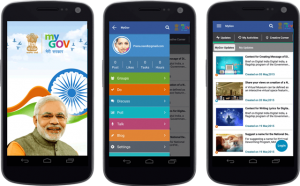 The MyGov app is a crowd sourcing platform that allows the Indian Government to connect directly with the citizens of India and vice-versa. Launched at the aforementioned event, this mobile application will allow Indian citizens to directly contribute to decision making of the Government, thus, enabling good governance. Through this application, citizens of India would be able to make their voice heard on several important social initiatives of the India Government like Clean Ganga, Clean India, Girl Child Education, Skilled India, Job Creation, Digital India etc. 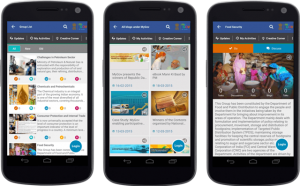 Aimed at offering a seamless mobile user experience, the app, thus developed by us, includes a number of sections like My Activities, Creative Corners, My Updates, In-App Alerts, Push Notifications etc., each of which would flash details about the different social initiatives of the Government of India and would even allow the users to share views and participate in online discussions and debates. The Android based app would even enable users to take pictures on a real time basis using the phone camera and use the photo gallery of the phone used for attaching images while posting comments. Additionally, to quote Mr. Rungta, “The app would have Google Mobile Analytics code residing within the APIs so as to enable tracking of usage patterns and behavior of users, as well as for other analytics.”

All in all, the MyGov app is foresighted to be invaluable for getting public feedback on government initiatives and team Indus Net Technologies is proud to be the development partner for such a noble mobile app.

Download this app for free and be an empowered citizen of India.