How Emerging Technologies Would Change The Face Of Retail Banking

All novel technologies are harbingers of change in society. Human activities would invariably transform around it, leaving the old ways behind and embracing the new wave abound. Banking, your good old retail banking, is not an exception too. It will transmute as per the technical limits set by various emerging technologies. Banks not recognizing this fact will eventually fail as their customers will move their business to places that offer the greatest convenience of use, faster transactions, and the most insightful prescriptions on how to best mobilize their funds. Emerging technology, all of which are already here, will enable retail banks to provide all of the above features, optimally. INT. would like to present to you a fun 10-minute read on what we foresee in the future for banking.

A Banking scenario fueled by an amalgamation of emerging technologies 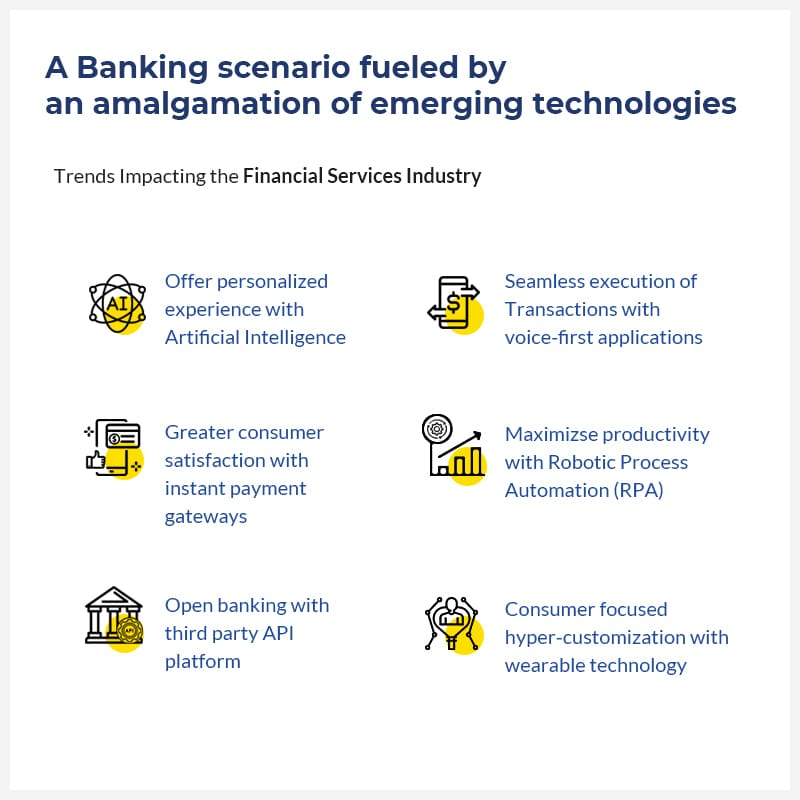 The simple truth is when consumers really want something, they really want it then and there. And there lies the importance of rolling out 5G. It will reduce latency or lag times of accessing web/mobile functionalities to under 1 millisecond. When this is applied to banking, that’s the closest we can get to real-time transactions, product, and service purchases. All that would be executed without a nagging delay. That’s great right? But wait. I would imagine you are asking about what 5G really brings to the table. In my opinion, it acts as a pivot, an enabler, for a multitude of technologies to be delivered through various services in the remotest of places.

Imagine yourself in the countryside and your spouse calls you to transfer the money instantaneously. With a pervasive 5G network, this can be done without a sweat. However, we haven’t even reached the exciting part of what we, at INT. would like to tell you. Consider a voice-enabled wearable device that’s on you, taking your voice-based (the wearable based Artificial Intelligence (AI) powered banking application would only act on your voice)  instructions for the impending transaction.

Furthermore, if you have glasses for virtual reality (VR), your eye movements would allow you to select your spouse’s profile for the payment, working in conjunction with your wearable-based app.

Alternatively, Robotic Process Automation based on voiced keywords that act as triggers would take care of the payment amount and beneficiary along with the payment itself. All this without lag, thanks to 5G!

You could throw in some blockchain technology for further security of the transaction (don’t worry too much about the advent of portable Quantum Computers to break the blockchain encryption because they are not expected in the next decade).

It wouldn’t be far-fetched if it was actually some cryptocurrency that was being transferred through the application (Retail Banks and Crypto? J.P. Morgan had launched its own Initial Coin Offering (ICO) in 2015).

Let’s now throw in some gamification where the same VR wearable device will allow you to earn points for future redemption through a game (Google Pay’s gamification is the inspiration here – please don’t forget that banking nowadays can be fun).

I know the last one was offbeat, but here’s something that everyone would love! The AI through the app suggests some flowers for your spouse as a result of the Recommendation Engine sifting through the big data generated from your spend patterns (this is what some proponents of Open Banking are doing today – your bank could do the same, only through your explicit permission given to the app) and learning from it.

There’s a strong chance, the above paragraphs were stretching what would be possible in the next few years but even if we could have half of what was mentioned, it will still be fantastic towards ensuring the best customer experience in an edge situation (no pun intended, I will explain why). Nevertheless, let’s summarize the technologies involved in the scenario presented:

On a serious note, while it looks sophisticated to cook up concoctions of interwoven technologies, it is a different matter altogether to actually derive a doctrine for logically conducting business with any of the technologies mentioned in the write-up. It is difficult to implement a viable strategy without the involvement of a competent Digital Transformation specialist, well versed in both the technologies and the implementation strategies.

While strategy is paramount to the success of a company’s digital transformation, let’s broach the topic of an incentive to initiate a thought process that involves the rapid implementation of it. Consumers have never been the kind who are forgiving when they are not satisfied by a service or product that your bank might be offering. If a business cannot bring them value through their offerings of products and services, they will simply look for a more suave rival who would satisfy their needs. Traditional retail banks will need to be on their toes as non-banking fintechs are already hot on their heels, looking to overtake them. However, history does not care about losers, it only remembers the victors. If banks embrace the best of technology and ensure that there is velocity, volume, value, variety, and veracity in their operations, they will come out tops. However, this has to be backed up with organizational will – the banking management would need to shed their conservatism faster than before and accept that technology is a force multiplier for profitable operations towards the future.

Here at INT., we have some of the best Digital Transformation consultants. If you are a bank or a business owner pertaining to any domain of human industry, we would invite you to talk to us about your aspirations of digital transformation for your organization/company. Book a call with our experts or contact us, whenever you are ready.